The 44th batch of recruitment of the Royal Grenada Police Force has seen dozens of young men and women join the line of defense and protection.

New life as it was termed by the commandant of the police training school is being brought into the organization for its continuity.

It is a predominantly male led batch of new recruits in which 44 are males with 16 females, as well as the second batch of 60 candidates to the police training school.

The commandant of the police training school ASP Hollie George in welcoming the recruits to a new chapter in their lives, says these recruits will now have navigate 24 weeks of intense training.

ASP George says the syllabus is drawn from the regional security system’s standardized training manual and is divided in police in theory and police in practical.

Acting commissioner of police Edvin Martin told the recruits to dream big while nurturing their ambitions, which would direct their attitude and future.

He impresses that the RGPF is guided by three core values; pride, integrity and respect.

Remembering the purpose of policing which is to uphold the law, prevent crime, bring criminals to justice and keep the peace, Martin told the recruits that they must be able to adapt to the broader roles of policing in the 21st century. 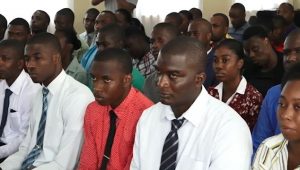