Vehicle owners have no need to panic as there is sufficient petroleum on the island to meet the need of the public; that’s according to management of sol gas station.

Some Grenadians complained of having difficulties in purchasing petroleum at several sol-gas stations around the island on Monday. Workers at the stations turned vehicle owners away as they were told that they were sold out. This created a traffic jam in some areas as long lines of vehicles were seen waiting for gas in the few stations that had petroleum. This led to some level of panic as rumors started to circulate that gas was scarce on the island, a statement that the Manager of Sol, Collin Francis says is far from the truth.

Francis explained that the situation was caused by a delay in a shipment that was beyond their control. The shipment of petroleum was supposed to arrive on the island last Friday but was somehow delayed and was only accessible on Monday.

By now all gas stations should have more than enough petroleum for the motoring public, as trucks began distribution early Tuesday morning. The manager reassures Grenadians that there is no need to panic. ‘ 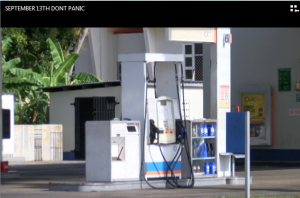