An organization with its headquarters in the United States has reached out to hospitals in Grenada and one fire victim with much-needed aid.

‘Spice n wee’ a non-profit charitable organization, with assistance from its local arm, made presentations during the past couple days.

The organizations’ motto is: ‘we lift each other to rise together’.

Dolton Jones is one of the co-founders of the organization and is ably assisted by Terrika Gay director of operations.

The group made its rounds making one of its stops at the pediatric ward of the General Hospital.

Director of hospital services doctor Carol Mc Intosh welcomed the donations on behalf of the mothers most desiring.

The second stop was at the country’s lone mental health facility.

Fire victim Gerin Charles was also a recipient of items and cash towards her loss. She expressed her gratitude to the organization for reaching out to her and her family.

Terrika promised that this initiative will continue. 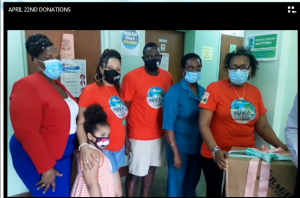