Caricom added its collective voice to recent happenings in the united states.

Chairman of the 15 member Caribbean community (Caricom), Dr. Keith Rowley, the prime minister of Trinidad and Tobago, says the regional body is “deeply saddened and concerned at the unprecedented scenes that unfolded at the capitol building in Washington dc, during the certification of the votes of the presidential elections by the us congress.”

The US Capitol locked down Wednesday with lawmakers inside as violent clashes broke out between supporters of President Donald Trump and police.

During the unrest, four people were killed and over 50 arrested.

The joint session to count votes was interrupted by protesters who stormed the Capitol, leading to a long delay; however, Congress certified Joe Biden as president-elect around 3:45 am on Thursday.

A bolstered group of law enforcement officers, which included reinforcements from the U.S. Marshals Service, the FBI, and other agencies, ejected protesters and allowed legislators to reconvene and count electoral votes.

Grenadian Attorney in the US Denison George says it is a frightening development as deficiencies were exposed in the democratic system, a situation which was championed by President Donald Trump.

He says it was a dark day in the US with the confederate flag being flown in the Capitol.

George notes the leniency shown by the police was unlike the strong handed approach during the Black Lives Matter march. He believes if the roles were reversed there would be thousands of African Americans dead or arrested.

He is however optimistic that a Democratic led senate will bode well for the black or Caribbean Community.

George says President elect Joe Biden, must now set a tone for the country of racial harmony and lead by appointing a balanced cabinet among others. 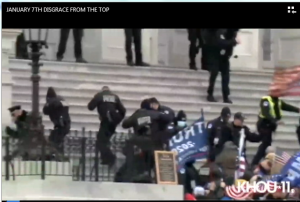