The founder of Grenada Talent Search, Eugene Gittens is a proud mentor, having known that the very first talent search was won by now International Monarch, Hollice Mapp.

Gittens spoke to the Grenada Broadcasting Network, an original partner in the 2001 talent show, expressing profound gratitude to have started the Talent Search, which he hopes to have back on stream in the not too distant future.

Hollice Mapp won the first-ever national Talent Search Competition, at the age of 15.

According to founder of the show, Eugene Gittens, he was astonished by the magnitude of talent that Mr Killa, then ‘Baby Killa’ possessed at the time and knew he was destined for great things.

Gittens says Mapp was so impressive at an early age; able to sing, dance, rap and entertain, he knew in his heart he was destined for great things.

Gittens said being in the music industry himself, he is aware of the challenges faced by artistes, but timing and persistency are key elements in achieving one’s goal.

He is hopeful Mr. Killa will make good use of this latest accomplishment.

He sees the ISM win as a natural progression for the talented performer.

Still producing music, Gittens says he is currently working with young talent and can be contacted on all social media platforms. 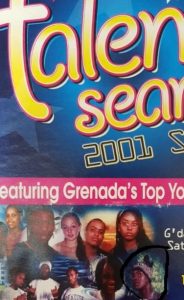