Grenada Postal Corporation has embarked on a series of training programs in disaster risk management for employees.

Tuesday saw the first of four sessions held at the National Stadium.

Enhancing postal preparedness for an effective response, ensuring minimum disruption in communication and facilitating prompt resumption of postal operations are the objectives behind the series of engagements.

Director of Post, Isaac Bhagwan, highlighted that Grenada, as a member state of the universal postal corporation, is paying approximately half of the total cost of the project, to the tune of thirty-three thousand, seven hundred and fifty-seven dollars.

Some of the areas covered under the training include the completion and updating of a hazard plan, the procurement of Disaster Risk Management equipment (DRM) such as transistor radios, generators, satellite phones, camcorders etc and training courses including with trainers.

The director of post says the Hazard Plan will be used to Map out and identify the particular threat that is likely to affect a facility.

National Disaster Coordinator Sylvan Mc Intyre in his remarks recognized the importance of the inclusion of all sectors in disaster management.

Dianne Roberts was contracted to facilitate some aspects of the training, with technical support by the national disaster management disaster agency. 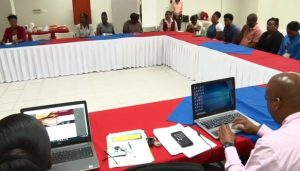