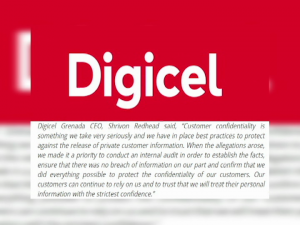 DIGICEL is officially distancing itself from the information leak that led to what is being dubbed cellphone gate.

More than a month after the Cellphone Gate Scandal broke, DIGICEL Grenada says it has finally concluded an internal investigation into how the sensitive information was leaked to the public.

The information was made public several weeks ago by a talk show host of a political program, who claimed that he obtained information relating to the government’s phone bill by walking into the Digicel office and asking an intern for the data in which the intern cooperated.

In a news release on Wednesday, Digicel Grenada says a thorough internal investigation has determined those claims were false, as the leak of the government associate’s bill did not originate within the company.

Digicel Grenada CEO, Shrivon Redhead said in a news release, that “Customer confidentiality is something we take very seriously and we have in place best practices to protect against the release of private customer information.

“When the allegations arose, we made it a priority to conduct an internal audit in order to establish the facts, ensure that there was no breach of information on our part and confirm that we did everything possible to protect the confidentiality of our customers.”