It will most likely be a Mitchell versus Mitchell at the next general election which is constitutionally due in 2023.

While Grenada awaits the convention for ‘the Grenada movement’ to officially determine its leadership, Dickon Mitchell has already won the favor of the national democratic congress delegates.

From three bids to two on the day of NDC’s convention, newly inducted member Dickon Mitchell got the nod as political leader of the party. 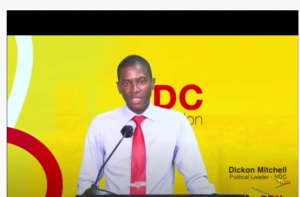