DEVON SMITH TO BE HONOURED WITH CRICKET STAND

Grenadian batsman Devon Smith will have a stand at the National Cricket stadium named in his honour.

The announcement was made by Prime Minister Dr. Keith Mitchell at Thursday’s independence celebrations at the National Stadium.

A powerful left handed opening batsman, Devon Smith, has been hailed as a consistent performer at the domestic level for the Windward Islands.

Smith came through the ranks and has been lauded for his contributions regional and internationally as well.

The thirty-seven year old batsman is at the moment, out of island as a member the Windward Islands Volcanoes, in the West Indies championship game, in Dominica.

Prime Minister Dr Keith Mitchell during his independence rally speech said Smith must be recognized for his contributions to cricket regionally and internationally.

The rally brought the curtains down on the 45th independence celebrations, under theme, “Building Resilience and Enhancing Social and Economic Transformation”.

Smith is the third Grenadian cricket player to be recognized with name branding at the National Stadium.

The first stand was named in honour of wicket-keeper Junior Murray and then batsman and leg-spin bowler Rawl Lewis. 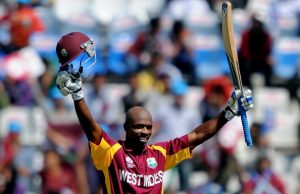