Tributes are pouring in following the death of veteran broadcast journalist George Grant.

The local media fraternity was shaken Monday night as the news surfaced that  Grant had died.

Grant was the Owner of Grenada Broadcast.com that featured news and current affairs online programs.

His death was confirmed by close family and friends, who said Grant was found at his home Monday night at approximately 10:30 pm.

The Executive and Members of the Media Workers Association of Grenada in extending condolences to the family, friends and Colleagues of Grant, highlighted his many decades in media and Broadcasting.

Grant also served on various volunteer committees aimed at providing standard regulations for the development of the media profession, including the media policy Committee.

In recent times, Grant’s contribution was mainly through his online media platform www.grenadabroadcast.com where he hosted his popular discussions that included Sunday’s with George Grant.
His contribution to media left an indelible mark that will forever be remembered.

Opposition Leader Tobias Clement expressed his condolences on the passing of the longstanding broadcast journalist.

The Management and staff of the Grenada Broadcasting Network expresses heartfelt condolence to the family, friends and colleagues of George Grant on his passing. 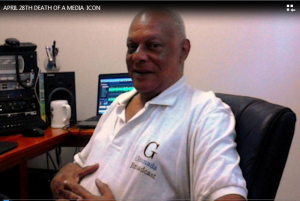 SECOND SUICIDE IN ONE WEEK