Daisy Hazzard confirmed to GBN’s Blossom Alexis-Welsh on Tuesday that she will be seeking to return to her post as Public Relations Officer for the Public Workers Union.

Hazard says despite the positive feedback she got from members with the push for a bigger role, she humbly declined a bid for a president’s position.

The PRO envisions a lesser than adversarial relationship with government citing that no good can come when unions only fight.

Highlighting past presidents, Hazzard, says the union demands leadership that is principled and honest.

She has thrown her full support behind Arthur Pierre for the position of President of PWU. 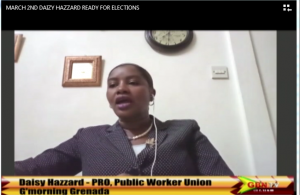