It was cricket, lovely cricket at the national stadium here in Grenada as West Indies looked to take the series to 2-1 against the best ODI squad in the world, England, but came up 29 runs short.

GBN was again amongst the spectators to get a feel of the vibes and party like environment from the patrons at the 4TH ODI match.

The rhythm section brought more life to the festive atmosphere, as the weather was the total opposite of Monday, lovely sunshine which brought forth thousands of spectators from Grenada and the visiting English side to witness a beautiful game of cricket.

The fans from Grenada, other Caribbean countries, the US and England flocked the stands of cricket stadium to get a piece of the action.

Fans said it was all about enjoyment and ‘playing a mas’.

The English following tells GBN that they are truly enjoying Grenada.

“Fantastic” was the word used by many visitors and Grenadians to describe the festivities at the National Cricket Stadium.

Steelpan music, dancing, masqueraders were out on coulourful and entertaining displays for the adoring fans.

Grenadians, some from the Diaspora were among the crowd enjoying the time with family and friends.

Other cricket lovers were very much in tuned with the match, taking in an excellent display of batting by both teams. 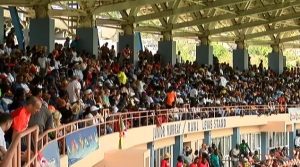 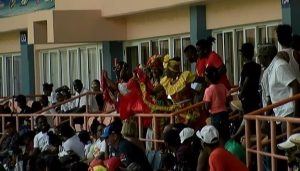