Jim Ferguson has been in the basket making business for the past forty years but despite his love, passion and dedication to the industry, he says not much has been achieved.

He said some of his colleagues have since given up out of frustration, but he continues because of his love for it.

The traditional as he sees it, appears to be dying.

Jim blames government for the lack of promotion of local craft.

Now that single use plastic bags have been banned, Ferguson says this is the opportune time for people to revert to something much more durable.

Ferguson makes his baskets from a material called ‘Wicker’ known locally as ‘Wiss’ which he obtains from different locations around the country.

He says there seems to be no interest in the art. 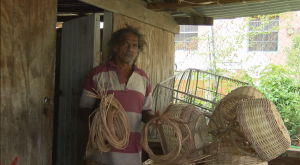 AN ACT OF COMPASSION