There is still no rollout date on when countries in Latin America and the Caribbean can expect to get access to the first doses of a vaccine against the deadly virus.

“While a number of vaccine candidates are under consideration, no vaccine has been approved for distribution across this region as yet,”

PAHO is calling on member nations including Grenada to prepare for the purchasing and distribution of a COVID-19 vaccine, and to prioritize who will be first in line.

Director of the Pan American Health Organization Dr. Carissa Etienne,, the regional branch of the World Health Organization, said Wednesday during a remote briefing from Washington that  “At first they will not have enough doses to protect everyone and it will be important to prioritorize.

Still, in anticipation of a vaccine rollout, PAHO this week is convening health ministers from across the region in an extraordinary session.

GBN attempted to reach Grenada’s Health Minister Dr. Nickolas Steele during the last two days for comment but he was said to be in lengthy engagements and unable to speak with us.

We also approached, Permanent Secretary in the Ministry of Health Dr. Francis Martin, for comment on Grenada’s procurement and roll out plan.

He said that they are still in discussion on that matter and that no form decisions have been made. He alluded to a meeting among local health officials which was in progress.

Vaccination campaigns have always been challenging in Latin America and the Caribbean, where countries have long struggled to vaccinate their population against diseases that are eradicated elsewhere in the world.

Some are skeptical about taking the vaccine, as a myriad of conspiracy theories abound.

Caribbean leaders have started articulating various points of view of the subject as they will be expected to drum up support among the populace.

Grenada’s Prime Minister, Dr. Keith told a parliamentary sitting this week, that he would be among the first to take the vaccine.

Last month, PAHO said its initial goal will be to vaccinate 20 percent of the population in Latin America and the Caribbean against the novel coronavirus.

Low-income countries in the region will be helped by the COVAX Facility, a WHO alliance that was created to ensure equitable access to COVID-19 vaccines. 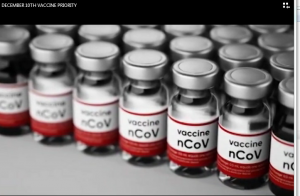