The Grand Etang lake is Grenada’s largest freshwater reservoir that is used by NAWASA in the dry season to augment the water supply for the southern part of Grenada.

The lake is situated at the crater of an extinct volcano.

Lately, there seems to be more weeds than water.

One of the island’s most popular attraction sites is seemingly disappearing under shrubs.

Over the years it was subjected to reeds, taking over more than half of the volume of the 36-acre area, reducing it to less than 12 acres to date.

One Visitor to the island, Jodie  from Connecticut USA, says she found Grenada to be a safe haven at this time and applauded governments’ efforts in the control of covid 19 on the island. This was her observation as she traverses the island making a few stops.

Taxi operator Bernard La touché says over the years of carrying people to this site, the volume of the lake has decreased drastically.

A special machine, known as Weedoo, was brought in, in 2019, provided by the International Water Stewardship Program (IWaSP).

It was meant to operate with a mowing and or root raking technique to clear the reeds.

However, Minister for tourism Clarice Modeste Curwen said with the onset of the covid19 pandemic and NAWASA making use of the water supply, the process of cleaning the lake was halted.

She gave the assurance that work should begin in a few days.

There were reports that the machine was out of commission, however, the tourism minister says she has no knowledge of that being so.

She is hopeful that the next few days will be used to sort out any obstacles before the commencement of work on Monday. 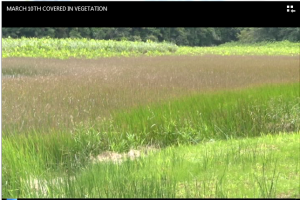