Grenada Bar Association says no communication has been given as to why the court facilities are not available at the new location as promised by government.

The date set for the opening was Monday September 30th.

Inspection of the proposed facility for housing of the courts was held on Friday.

According to the Bar, there it was noticed that a number of outstanding works were not completed, nor would they be in time for Monday’s scheduled opening.

The second floor of the Clico Building is being retrofitted for the housing of the civil and criminal courts.

At present 4 judges are available to serve, with only two courts functioning.

Bar President Lisa Tyalor told GBN via telephone on Monday, that no communication was relayed as to what caused the delay and how soon it may be finally completed.

She told our news desk that a Tuesday meeting will be held to discuss a number of outstanding issues, including the scope of works to be completed.

The Minister added that the delay in the works was due largely in part to requests from some judges as to chamber conveniences, such as additional windows, the ceiling level and some other adjustments.

The work she says is ninety-eight percent completed and the first court day will be October 4th, at the new location.

Meanwhile a Civil claim by the Grenada Bar, is before the court. 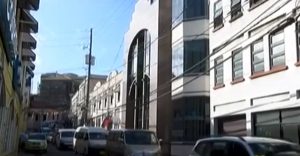 Farmer Loses Over Fifteen Thousand To Vandalism and Praedial Larceny