One week training in correctional management and leadership has concluded at her majesty’s prison.

Over one hundred officers from Her Majesty’s’ Prison, the Royal Grenada Police Force and the Grand Bacolet Rehabilitation Center have been trained in Correctional Management and Leadership.

Officers from both the RGPF and Prisons were trained in the areas of Ethics, Communication, Prisoner Transport, Techniques in handcuffing among other areas, while those attached to the Grand Bacolete  Center  in the areas of Mentoring, de-escalating violence, leadership among others.

To facilitate the one week exercise, two correctional Officers were brought in from Canada.

The deputy Commissioner for correction in Canada Dr. Sheridan Cyrus, is the brainchild behind the exercise.

He told the ceremony the commissioner mentioned needing a holistic approach for the island, so that was tackled on this trip.

He said they started with inmates, then moved onto officers.

He strikes the importance of officers keeping up with t ever changing trends and technology.

With the responsibility of rehabilitation hinged on them, the prison head implored officers to implement the knowledge they have gained, reiterating the need for continuous training.

Commissioner Mitchell highlighted the RGPF’s 70% solve rate as a plus,  but a burden on Her Majesty’s Prison, as once failed by society, they now have the task of rehabilitating them.

A correctional officer and facilitator Sargent Kenton Chance indicated that this has been the most satisfying week in his entire career.

Dr. Cyrus who heads the team, promised to be back on island in June to conduct a dental clinic in St. David and again in July for a similar training program. 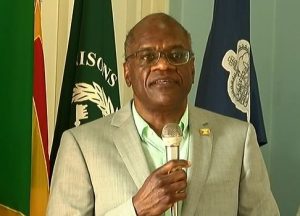 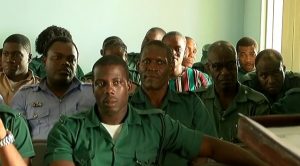