The body of the teenager was found covered in the Bushes at Good Hope St. George close to her home on March 21st, 2016. She was a student of the happy hill secondary school.

Demlyn who is married to the sister of the deceased was arrested and charged for her death.

Director of Public Prosecution Christopher Nelson spoke with GBN’s news desk earlier today on the outcome of the case saying that the fifty year old Murray was convicted by a twelve member jury.

The accused has been on remand at the Richmond Hill Prison after Senior High Court Judge, Justice Paula Gilford declared a mistrial in the case against the then forty-eight-year-old Madigras resident in 2018.

A retrial was ordered, which started on the 10th of February last year and concluded last Friday. The judge has set a sentencing date for May 23rd, 2022. Murray faces a maximum penalty of Death.

The DPP explained further the circumstances that might have led to Brittney’s demise, addding that Brittney Baptiste had made a report against Demlyn  back in 2015 about having sex with her being under the age of sixteen. Demlyn was arrested and charged in December 2015 and was before the court awaiting trial. Britney was the main subject in this matter.

The defense was represented by Attorney Herrica Willis while the prosecution team was led by Mr. Nelson.

According to the DPP the jury deliberated for about two hours before returning their verdict last Friday. Sixteen witnesses were called.

The DPP added that this is the second conviction they have had in a case where a charge of capital murder was laid.

The first was against Twily Joseph who was convicted in December 2019 for the death of nine-year-old Ariel Bhola.

The law was amended in 2012 to create Capital and non- Capital murder. 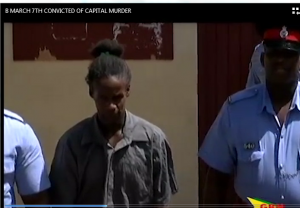 ANOTHER DEATH IN ST. ANDREW