The situation in neighbouring Venezuela remains a concern for regional countries who are hoping for a resolution without military or otherwise intervention by foreign countries.

The need for a peaceful solution was expressed by Minister for Carriacou and Petite Martinique Affairs, Norland Cox.

He says he is hoping that CARICOM heads of Government will be able to help in resolving the developing issue facing the Venezuelan people.

In a press conference at The Normandie Hotel, St Ann’s in Trinidad this weekend, Minister Cox was quoted saying, “the world is a very small place and we are all very sad­dened by what is happening there (Venezuela). The whole region, of course, wants the situation to be resolved as quick­ly as possible.

“If something is going wrong in your backyard it can affect you significantly and so we are just hoping for some consensus for heads to come together and resolve this.”

Cox told the Trinidad media that Grenada is working on the diplomatic end to ensure that they can come together and resolve this.

“It is very painful as Venezuela has been a regional friend to Grenada having worked together for a number of years” says the minister, who was in Trinidad to support Grenadian artistes in the ISM.

He warned that if not controlled there will be collateral damage for neighbouring countries.

Referring to the presence of some of the world’s superpowers in local waters as the situation rages on in Venezuela, Cox said he’s very concerned. 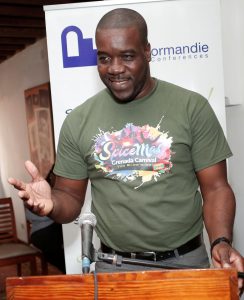