Citrus farmers are being encouraged to cultivate Guava as an alternative, as the Ministry of Agriculture battles with the Citrus Greening disease.

The disease is one of the most serious citrus plant diseases in the world.

Once a tree is infected, there is no cure.

While the disease poses no threat to humans or animals, it has devastated acres of citrus crops across the island.

As a result the ministry says it will be constructing two green houses to begin addressing the issue.

Agriculture Minister Yolande Bain-Horsford addressed the concern during Friday’s parliament sitting, saying one of the Green Houses will be used for the germ plasm for citrus and the other as a citrus nursery.

According to the Minister, Grenada has not been able to propagate citrus for the last two years.

The minister encouraged farmers to start cultivating Guava as an alternative in the meantime.

She says this year’s plant distribution will see heavy emphasis on Soursop and Avocados, despite the demand for citrus,  so as to avoid spreading of the disease. 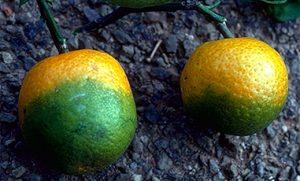