Sanitization facilities and a sick room are just some of the measures that must be in place if churches are to reopen their doors to the public.

Recently strict COVID 19 protocols for churches were outlined by government to ensure the safety of its members.

The process begins with an application by religious leaders requesting the reopening of their church.

Request must be submitted by Church Leaders at least three working days prior to the proposed opening date.

Some of these protocols include calculating the number of attendees to be allowed in the building, as well as 36 square feet per person, seating space.

Copies of the protocol were circulated to church leaders.

How do church leaders see this being a reality?

Pastor Devon Rachae  local pastor says it would be a challenge for some.

He explains how he intends to operate in order to accommodate the protocol, although their doors would not be opened immediately as transportation would be a factor.

Rachae says he pastors two churches. however one will be able to accommodate one service while the other will have three services on a given day to work within the protocols.  it would take extra sacrifice he says however it is doable.

Online services will continue as they have recently captured a larger audience.

with word from the government that the protocols will be reviewed every two weeks , adjustment to the protocols he says are likely.

Church must adhere to a maximum of 10 individuals allowed to attend weddings, whether at the church, or the reception.

Any Minister of Religion found in violation of the protocols for the reopening of churches will forfeit the opportunity to continue his/her Ministry throughout the duration of the declared State of Emergency.

Applications can be sent to Religiousaffairsgrenada@gmail.com 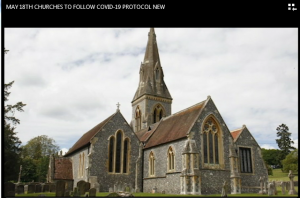 THE LEGAL FERTERNITY MOURNS THE LOSS OF A SENIOR MEMBER OF THE PROFESSION.