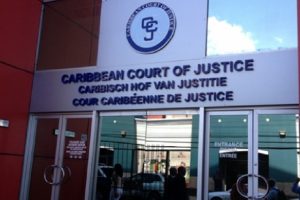 The Trinidad-based Caribbean Court of Justice (CCJ) will sit in October to hear a request for an advisory opinion by the Caribbean Community (CARICOM).

The CCJ, which was established in 2003, acts as an international tribunal interpreting the Revised Treaty of Chaguaramas that governs the 15-member regional integration grouping.

President of the Court, Justice Adrian Saunders, in the case management of the matter in which attorneys representing Antigua and Barbuda, Barbados, Grenada, St Kitts-Nevis and Jamaica as well as the Guyana-based CARICOM Secretariat made appearances, said that the matter will be heard on October 22-23.

The CCJ is hearing a request for an advisory opinion by CARICOM pursuant to Article 212 of the Revised Treaty of Chaguaramas which states “the Court shall have exclusive jurisdiction to deliver advisory opinions concerning the interpretation and application of the Treaty” and that “advisory opinions shall be delivered only at the request of the Member States parties to a dispute or the Community”.

In its submissions, Grenada said it would like to know when a state has in the past opted out of a decision; nationals of that state nevertheless enjoyed the benefits of the decision adopted by CARICOM.

“The dates for hearing of oral submissions would be Tuesday October 22nd and Wednesday October 23rd …and each member state representative will speak for no more than 45 minutes.” The CARICOM Secretariat will also be allowed 45 minutes.

Justice Saunders said that the orders of the court will be served on all CARICOM member states.

CALL FOR HEALTHIER CONDITIONS AT THE PRISON