GBN reported last Tuesday on the resignation of Senator Christopher Deallie from the post of chairman of the board of directors for Grenada’s citizen by investment program.

The resignation was confirmed by senator de Allie who declined to further comment when pressed by GBN for the reason behind the move.

However, in a statement released on Monday senator De Allie provided the public with his explanation. 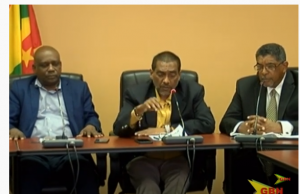 SUSPENDED FOR PUTTING THE NATION AT RISK