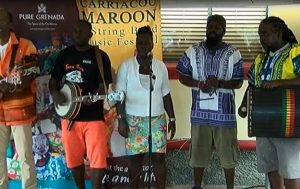 A number of traditional bands participated, giving the gathering a hint of what can be expected at this year’s festival.

The festival which runs from April 26 to 28 is one of the major events tailored at sustaining the sister isle’s cultural heritage.

This milestone celebration is held under the theme, ‘Deeply rooted in our traditions, remaining true to our culture.’

Minister for Culture and the Arts, Norland Cox said this year’s theme speaks to the ministry and by extension the government’s objectives for sustaining the cultural heritage in Carriacou and Petite Martinique.

The minister also commended the maroon committee and the people of Carriacou and Petite Martinique on an excellent job in preserving and sharing Carriacou’s rich culture from generation to generation.

Chairperson of the maroon and string band music festival, Thereia Lendore, outlined the events planned for this year’s festival.

The weekend she says begins with the traditional cooking of the Saraca, at the opening Ceremony.

From 6am would be the wetting of the ring or libation at Belair Junction. The blowing of the conch shell will notify persons that Maroon is above to start.

Then they move to Belair Park to commence cooking. The sharing of food starts at 4pm and will continue until food is finished.

From 7pm a Flambo March will be held from the entrance of the park to the stage, where the official ceremony begins.

It will Include performances from local individuals and groups, as well as a special first time performance by Heritage Theatre from Grenada.

On Saturday the 27 April the day starts at 10:30am with a welcoming celebration at Tyrrel Bay Port.

Visitors will be treated to a taste of culture, following by what is promised to be the real Maroon experience, with strings in the city.

This year’s Maroon and String Band Musical Festival is backed by a number of sponsors, who have pledged both technical and monetary contributions to ensure the successful execution of this milestone celebration.