Although a date is not set for the commencement of construction on the Carlton house, 2021 is in sight.

The Grenada cooperative bank is well on its way in accumulation of funds towards the re-establishment of the facility.

According to the banks managing director, the bank awaits the formal approach from government as it relates to the design and location.

The bank has set a target to raise half a million dollars towards the re-establishment of the Carlton house.

Managing director of the Grenada cooperative Bank Richard Duncan speaking on the issue during a media brief on Thursday recognized who he referred to as their alliance partners and the pump-it-up family fun walk in realizing this dream.

The government has vowed to pump one million dollars toward the project.

After first announcing  at the beginning of April this year, the goal of fast-tracking the reconstruction of the Carlton House, health minister Nickolas Steele during a press brief in May reiterated government’s view to prioritize the building of the facility.

Steele said at that time the design and construction of Carlton House, which previously served as one of the two institutions for substance abuse patients, is expected to begin between the said May month and December, albeit at a new location.

During the budget presentation on Wednesday, Minister for finance Honorable Gregory Bowen spoke again on the expected start of the facility.

The purpose of the Carlton House facility was to provide an environment of rehabilitation for persons struggling with substance abuse.

On 7 September 2004, Carlton House was destroyed by Hurricane Ivan. The remaining structure was then completely destroyed by fire on 24 February 2006. 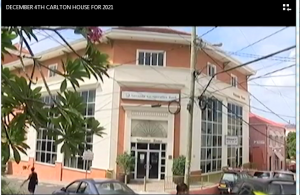