Political tension in neighboring Venezuela, Haiti and Guyana were the amongst the highlights of CARICOM leaders’ discussion this week.

Regional leaders participated in a two-day inter-sessional summit in St. Kitts and Nevis, which began on Tuesday.

Caricom has sought to play a leading role in trying to diffuse the situation in Venezuela, where Opposition Leader, Juan Guaido, who declared himself interim president, is leading the effort to remove President Nicolas Maduro from office.

United States Vice-President Mike Pence was expected to meet with Guaido in Bogota, Colombia, yesterday amid reports of more sanctions being imposed on the embattled South American Country.

Caricom chairman and host prime minister, Dr Timothy Harris, has maintained that the 15-member regional grouping’s policy is of non-interference in the internal affairs of Venezuela, a move that has been commended by the Venezuelan government.

Harris, who recently led a Caricom delegation to Uruguay, is expected to bring all the leaders up-to-date on the so-called Montevideo Mechanism, in response to the call by the United Nations Secretary General Antonio Guterres, to find a pathway to a peaceful resolution through dialogue and from a position of respect for International Law and Human Rights.

Apart from the Venezuela crisis, the regional leaders are also watching the unfolding political situation in Guyana, where the coalition Government of President David Granger has collapsed, after the main Opposition People’s Progressive Party (PPP) had been able to successfully move a motion of no confidence in the National Assembly on December 21, 2018, where the Government had enjoyed a one-seat majority.

The political situation in Haiti, the only French-speaking member within the Caricom grouping, is another worrisome issue for the regional leaders.

President Jovenel Moise, who took up office in 2017 following protracted elections, is under pressure from opposition parties to step down, over his handling of domestic affairs as well as the use of funds under the PetroCaribe agreement.

Several people have died in Haiti since the street demonstrations started earlier this month and Caricom in an earlier statement said it “is deeply concerned about the continuing violent protests, which have resulted in the loss of life, property, destruction of infrastructure and caused grave distress.

All these issues are combined with unsettling feelings over Caricom’s public clash with the Secretary General of the Organisation of American States (OAS) Luis Almagro, on Venezuela and Dominica.

Almargo has shown no signs of backing down, indicating last weekend that that he stands by his statements and actions. 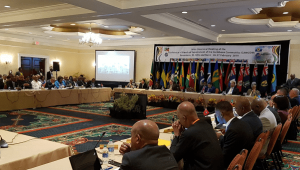