NADMA facilitated the Caribewave on Thursday in the parishes of St. Mark, St. John, and St. George, along the western coastline.

A Tsunami generated by a magnitude 8.5 earthquake, was this year’s scenario.

Thursday’s exercise saw over 1,800 persons participating in the simulation.

The drill involved students attending several schools across the western corridor including Victoria and Gouyave and the workers at Grand Mal in St George.

Caribe wave is an annual earthquake and tsunami simulation exercise held within the region.

High levels of vulnerability and risk to life and livelihoods from tsunamis along the coasts of the Caribbean and Adjacent Regions provide a strong incentive for countries and local jurisdictions to prepare for a tsunami and participate in this exercise.

Health Disaster Management Officer, Osbert Charles says it is important that people are aware of the importance of such an exercise.

One of the participating teachers says he believes the Caribe wave exercise should be made more common on the Grenadian calendar.

This year has seen the largest turnout since the annual exercise began, this was mainly because 3 parishes were incorporated this year rather than the usual one. 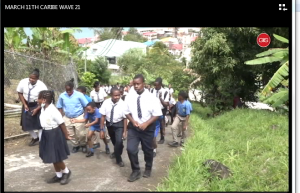 A TRIBUTE TO MR. ELVIN NIMROD