Traditionally, years gone by, the night before Carnival, families prepared food in their yards for the Canboulay dinner. This event was a family feast that continued until ‘foredaymorning’ on J’ouvert morning.

Speaking during the virtual launch of Spicemas 2022 on Monday Gill says Canboulay centers will be registered across the island, and the intention is to judge every center and award prizes for the first three places.

To facilitate the reintroduction of the tradition, Dimarche Gras will now be held on what was originally majestic Thursday.

The Carnival Queen show which was traditionally held on majestic Thursday every year will now take place on July 27th.

According to Gill, this will allow the newly-crowned queen a longer reign during the season. 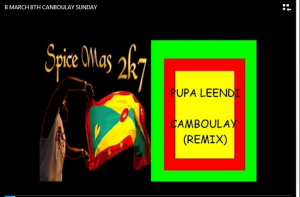