President of the Senate, Chester Humphrey, is challenging members of the Senate to bring new laws to parliament to address the scourge of sexual abuse in Grenada.

At a recent sitting of the Senate, Humphrey said he is still awaiting response from the various women organisations to a recent court matter involving a sexually abused infant.

“It is time to bring new legisliation. If the judges are not minded to do it parliament must do it. We must set the correct level of punishment for certain kinds of offences so that we send the message outside there that this sort of behavior is not accepted in Grenadian society” Mr. Humphrey said.

The president of the senate maintains that the lewd behavior of some that are broadcasted via television as entertainment is not helpful to the present situation in Grenada.

He said he will take ink to paper on the issue, of what he deems public indecency broadcasted.

“I intend to write the general manager of FLOW who is my very good friend, but I appeal to the conscience of corporate community. Everything must not be interpreted for its profit, returns.”

The issue of indecency was addressed by the president of the senate and other members, during a prior sitting in light of the upcoming carnival season.

Humphrey believes there are values in Grenada’s culture that must be preserved. 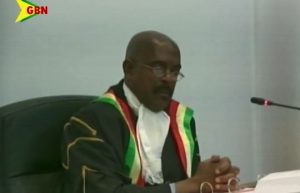