Government is yet to accede to requests by the National Buses Association for an increase in bus fare.

The fifty cent hike and other issues were laid on the table at a meeting this morning; however both parties left without reaching any agreement.

No final decision was reached as discussions were put on hold even after government met with bus operators on Wednesday.

Permanent Secretary in the ministry of transport Anna Brizan said government is appalled at the action taken by bus operators to call a press conference on Monday.

The Permanent Secretary says despite a date is not set for the next meeting, she wants to make it clear that the process is paused and not terminated and it is not discontinued. she says government is concerned about the responsible way in which engagements are to take place. Brizan says it is the practice that when engagements are ongoing  that there are certain procedures and processes that are held.

She says governments wish is for public transportation to function in a dependable and reliable manner and therefore appeals to the national bus association to help the government to have a dependable transportation system throughout Grenada and across all zones, before it can continue engagements in a structured and responsible manner.

Bus operators are proposing a fifty cent increase in fees, which they believe is long overdue, and should help ease the extra cost they now have to bear for sanitation.

President of the National Bus Association Garth Woodroffe says, based on the number of passengers they now have to carry now which is ten, is not going to be feasible based on their calculations, especially since they would have additional expenses like purchasing sanitisers.

Brizan however says the economy needs to first bounce back since people cannot afford to pay more for public transport  right now.

She says while they understands the immediate effect of the fee increase to the operators, it is governments belief  that the citizens cannot bear such an additional cost at this time and therefore continue to consider and explore other forms of support such as what is already in place with the sanitization. 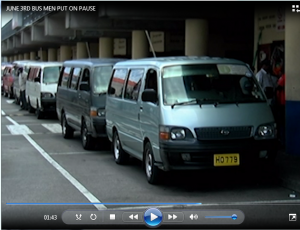