In less than two weeks five individuals have been arrested and charged for the offence. A St. Mark resident was brought to court and made to place bail in the sum of $20,000. 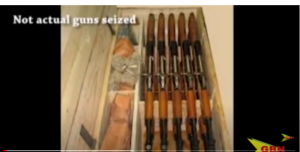