Former permanent secretary/director-general in the Grenada ministry of finance, Dr. Brian Francis has been suspended from his job as the new chief executive officer (CEO) of the Barbados agricultural development and marketing corporation (BADMC).

According to a report by the Barbados nation under the headline “board and CEO lock horns over handling of employee dismissal”, Francis when contacted at his home confirmed his suspension and said “allegations of misconduct” was said to be the basis for the action.

Francis who has been on the job for eight months further reportedly told the newspaper that he will be on suspension with full pay “until further notice” and that the board has informed him this was to allow them to investigate the allegations.

At the center of the controversy is the board’s recent decision to settle a claim made by a former temporary employee to the tune of just over $7,000 for alleged breach of contract; a decision Francis let the chairman of the Barbados agricultural development and marketing corporation know he was in “complete opposition” to. 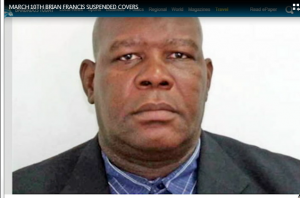