The court of arbitration for sport banned Grenada’s sprinter Bralon Taplin for four years; the decision was appealed but was dismissed.

A four-year ban handed to Grenadian sprinter Bralon Taplin has been upheld by the Court of Arbitration for Sport (CAS) and he will remain suspended until September 24, 2023.

According to the Court of Arbitration for Sport Taplin was charged with intentionally evading sample collection after he left the stadium following his 400m victory at the Grenada Invitational Athletics Competition on April 13 last year without completing doping control.

GBN contacted Sports Minister Norlan Cox for a comment on this development and he said that a statement was issued by the Grenada Athletic Association which he stands by.

The sport minister says based on the press release that was put out by the GAA, that he says is their current position. The release was put out in consultation with the ministry of Sport.

the matter is not a closed matter so he says he does not wish to comment on it.

Taplin, who has a Personal Best of 44.38 from 2016, appealed his ban to the Court of Arbitration for Sport and requested that he be declared immediately eligible to compete “on the grounds that he had not been properly notified that he had been selected for the doping control test”.

The Court of Arbitration for Sport statement adds that the Sole Arbitrator found that the evidence given by Taplin that he was never approached, followed or accompanied by anyone from the Grenada NADO “to be implausible”, leading to his four-year period of ineligibility. 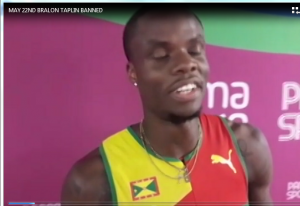