News reached GBN at about 3pm today of a boulder which smashed into a house at Gouyave estate in St. John.

Footage obtained via social media shows the partial remains of a house displaced from its foundation with debris scattered everywhere.

As the video pans out into the road a massive rock is seen settled in the road at the bottom of the house, standing taller than the roof of another house which it came to a halt next to. 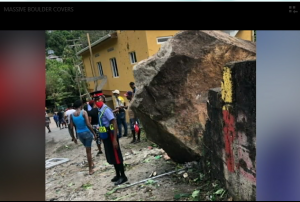