Talks between Dr. Mitchell and Mr. Rahming touched on challenges currently facing the region, with specific mention of the potential cross-border issue which can arise from the situation in Venezuela.

Dr. Mitchell reiterated the position that there is need for urgent dialogue between the parties concerned to resolve the problems.

Continued attempts by Haitian migrants to enter the Bahamas illegally and ongoing efforts to tackle drug and gun proliferation also formed part of the discussions. 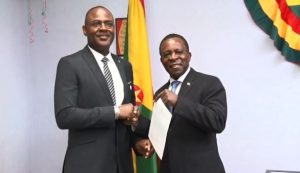