BACK TO THE NEGOTIATING TABLE

The managing body of aviation services of Grenada ltd along with the bank and general workers union seems to be on the right path to finding an amicable solution to the ongoing issue of workers’ salaries among other matters.

Last Friday the union issued a press release airing their dissatisfaction with which management of ASG is handling the situation.

Union officials tell GBN that efforts to get an audience with the management of Aviation services of Grenada Ltd last  Thursday and Friday  to discuss the proposed reduction of the workforce, salary payments and other matters proved futile.

Bank and General Workers Union Field Officer, Joseph Mitchell says,as a result the union had no choice but to instruct workers to start industrial action.

They first started with the wearing of red arm bands and t-shirts on Friday and it was then escalated to a go-slow.

According to Mitchell, ASG invited the union to a meeting last weekend, and following the discussions, they decided to put a pause on the industrial action.

Mitchell says they are now deliberating on a draft agreement sent by the company.

Mitchell has promised to provide an update after talks with the ASG employees and the management. GBN has made several attempts to obtain a comment from the management since the dispute started, but so far none has been forthcoming. 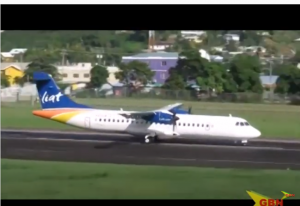