The case involving Evon Smith  who was allegedly assaulted by an Irish couple in Ft Jeudy last June, is far from over, as the case is expected to go back to court next Monday.

Donal Kavanagh and Sarah Hatton were charged for the offence of causing harm after being accused of beating a local black man, Evan Smith, who ran over and killed their four-year-old dog, Herbie.

The case has sparked racial tensions across the country and the Kavanaghs have been the subject of protests, in which hundreds of people chanted ‘No Justice, No Peace’ while carrying signs reading ‘Black Lives Matter’ and ‘Not In My Grenada’.

The couple made their first court appearance about one month after the incident, but the matter was adjourned until February 15th, as the legal files were not available at that time.

The Kavanaughs are currently on $10,000 bail each and are represented by attorney at law Arley Gill. 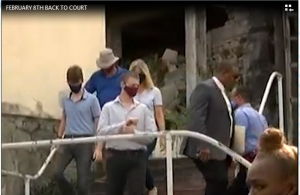