Despite ensuring that the public was informed of a recall of several lots of infant powder formulas, including Similac which is widely used in Grenada, officials say there are certain steps parents can take if they have not immediately stopped using those specific baby formulas.

Last week Abbott which is the manufacturer of powder formulas Similac, Alimentum and EleCare initiated a voluntary recall of their products affiliated with a specific plant.

This follows consumer complaints relating to a particular bacteria found in infants who had ingested powder infant formula manufactured in that precise facility.

The CMO says children who may have consumed the products before the recall, may exhibit telltale signs of an infection.

Dr. Donald who is a pediatrician notes that the symptoms are specific to the bacteria identified in the recall.

She says any cases of illness should be reported to the ministry of health while clarifying that the product if suspected to be in the recalled batches be kept and reported to the local distributors.

Abbott recalled select batches of infant powder formulas last Thursday citing that the products under recall have a multi-digit number on the bottom of the container. 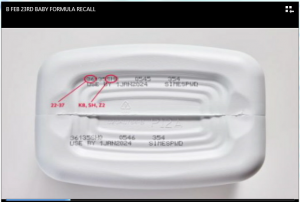