Ms. Taylor was appointed Honorary Consul of the Kingdom of Spain to Grenada on Tuesday, October 15th.

Ms. Taylor, an attorney at law for twenty-three years, was presented with her Instruments of Appointment by the Minister for Foreign Affairs, Hon. Peter David.

In presenting her with the instruments of appointment, Minister David pledged the support of his Ministry in the exercise of her duties. “I’m pleased to present to you this Exequatur at the occasion of your appointment as Honorary Consul of the Kingdom of Spain to Grenada…and I look forward to working with you.”

Minister David also commented on the enduring relations between Grenada and Spain, which began in 1976 when both countries established diplomatic relations.

Grenada is accredited under Spain’s embassy in Port of Spain, Trinidad and Tobago. 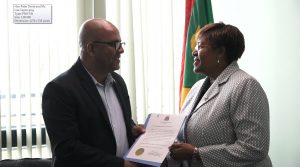 Labour Commissioner To Host Conciliatory Talks between Unions and Government