ANOTHER HOME LOST THROUGH FIRE

A teacher and his family have to start over, as their home was engulfed by fire on Tuesday night.

The fire occurred at the Beausejour housing scheme within the hours of 7 and 8 pm.

The homeowner – a teacher at the Grenada Boys Secondary School who said that while they lost everything, he is happy that none of his family members were home.

There was still hope in the voice of Martin Alexander a Teacher at the Grenada Boys Secondary school who lost his home by fire on Tuesday night.

Alexander says that he was notified by neighbours that he and his wife needed to hurry home as their house was on fire.  By the time they arrived the interior of the house had already been consumed by the flames.

While the family who lived in the Beausejour housing scheme lost everything, Alexander sees it as a time to rebuild bigger and better.

The Alexander family will be temporally staying with family members until they can make other arrangements.

Martin took the time to say thank you to all who reached out to support him and his family.

Minister for Education the Hon. Emmalin Pierre reached out to the family on Tuesday morning, to express her deepest Sympathy for their Lost.

She says her ministry is able and ready to lend a helping hand to the family.

This is the third family to lose their homes by fire for 2021; the most recent house fire occurred last week Friday when 79-year-old Cherry Hill resident Stephen Frank’s entire home was burnt. 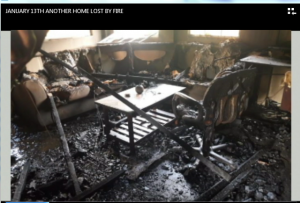 A CALL TO PARENTS