ANOTHER DEATH IN ST. ANDREW

One teenager is in police custody helping with investigations into the death of an 18-year-old St. Andrew resident over the weekend.

Charges are expected to be laid by the end of today on a 19-year-old who is currently in police custody, following the stabbing death of 18-year-old Dominique Seals a Guyanese National who resided at Sendall Street Grenville St. Andrew.

In what has been determined to be the 2nd homicide of the year, information gathered indicates that the now deceased was in an altercation in the area known as trench town with two other young men.

Another 18-year-old Kyle James of Grand Bras St. Andrew was also stabbed during the argument.

Eyewitnesses who preferred to remain anonymous recollected what they saw on Saturday night.

Residents of Trench town are saddened by what happened.

The mother of the deceased declined an interview on Monday morning, saying she is too emotionally broken over the loss of her only son.

The mother of the teenager in hospital also declined to speak.

Mr. Merchant was brutally murdered and dismembered in February and parts of his body placed in buckets, which were later found floating in the nearby Dunfermline river. 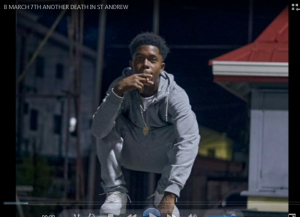