Grenada’s Anderson Peters is the World Champion in Javelin.

Estonia’s Magnus Kirt was second with 86.21 although he retired from the competition after appearing to injure his shoulder with his fifth throw.

In speaking to the media after his historic win, Peters said he always he has always been working towards becoming the world champion. After the first throw, he was confident of the victory.

For him it was an honour to compete in front the world record holder Jan Železný, whose 98.48 m in 1996 remains unbroken.

He calls the sport of Javelin ‘Scary’ saying it is unpredictable.

“That was unbelievable for the whole country,” he explained. “He showed it’s possible for anyone to become a world champion.”

His next move is back to school. The 21-year-old studies at Mississippi state university and told reporters he had to sit exams next week. “I’ve definitely missed some classes, I have a test on Tuesday,” Peters said.

There has been an outpouring of commendation across the country, as Grenada shares the historic moment. 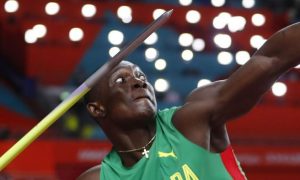