It was a welcome fit for a king.

Addressing the audience, Peters spoke of his journey to greatness which wasn’t easy, but he persevered.

Bringing home Grenada’s second gold medal he says meant a lot to not only him but the entire country.

General Secretary of Grenada Olympic committee Vida Bruno Victor reminds students that it only takes a spark to get a fire going and sports cannot stand on its own, but goes hand in hand with academics.

His journey of realizing his dream was remembered.

Peters is also a multiple time CARIFTA Games champion at the discipline and in 2016 earned a bronze medal at the 2016 IAAF championship in Poland setting a new Grenadian national record and OECS record at the same time. 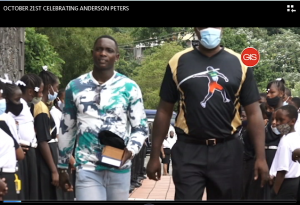