AN ASSET OR A LIABILITY

With the recent increase in sharks in the Caribbean Sea, with sightings reported near a number of neighboring islands, concerns have been raised over the reason for the noticeable increase in the shark population, the safety of the water, and in some cases, the preservation of said sharks.

In the Caribbean, shark populations have been decimated along a number of fronts.

Loss of reef habitat and health has driven shark decline.

Hence the surprise and concern increase in shark sightings once again in our waters.

What does this mean for the marine environment?

Coordinator of Marine Protected Areas at Grenada Fisheries Division Olando Harvey explains that the relationship between underwater volcanoes and sharks was added to the conversation after several social media posts from neighboring islands highlighted that the magnetic fields surrounding volcanoes may have influenced the recent increase. Harvey explained the connection between sharks and volcanoes.

The MPA Coordinator added that fear or misunderstanding may have a role to play in the lack of concern or capacity to care for the importance of the creatures to our marine environment. 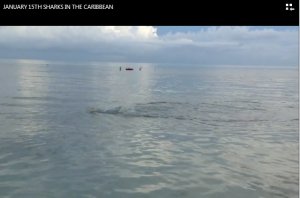