AN ACT OF COMPASSION

One young citizen is urging grenadians to not cast judgement or scorn on the homeless or people on the street.

Some may see people in the town of St George daily without clean clothes, no shoes, or begging for some form of money and food.

Some of us view it as nuisances when we are approached by these people, and may even go so far as to accuse them of wanting money for unfavorable things.

On Wednesday, 23-year-old Renesha Charles of Darbeau St George provided one well-known beggar in the town of St George who she refers to as Godfrey with new clothes and shoes.

Charles says she and Godfrey conversed from time to time and she considers him her friend.

She explained how the initiative wasn’t planned, but ended quite favorably for all involved.

The young woman is urging other Grenadians to not turn a blind eye when they see or are approached by others who are less fortunate.

Charles said she attempted to get Godfrey a haircut, and even made it to the barber but after the man grew impatient, they left.

She says she would not give up on getting him that haircut. 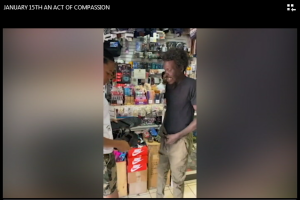