Caregivers responsible for the elderly who suffer from Alzheimers and Dementia are now better equipped to serve and assist.

Grenada via video link along with Mt St Mary’s College in New York, in a partnership with GNOW and its aging commission hosted an inaugural workshop.

It targeted the younger caregivers who look after people suffering from Alzheimer’s and Dementia.

Arlette Murrain, Global Executive Director for GNOW’s Aging Commission, says with the primary focus of looking at Alzheimer’s and dementia in Grenada and its effects throughout the world, caregivers aged 18 to 45 who have experience received the rewards of the symposium.

Murrain says it is a one day workshop and they hope to document the event.

However she will be in Grenada until April 25th to conduct other workshops.

Executive chairman of the Queen Elizabeth Home for children Marion Pierre, who is also a marketing specialist, welcomes the workshop.

Pierre says as she aids GNOW in their fundraising drives, the workshop could boost their campaign of creating awareness of Alzheimer’s and dementia. 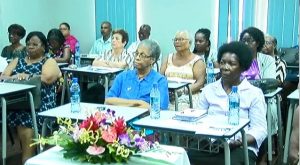