Grenadians were out in their numbers this morning as they prepared to venture to the sister isle for the weekend activities.GRENADIANS

Despite the inclement weather on Friday morning many Grenadians were gathered at the Carenage in St George’s to board the osprey for their excursion to Carriacou.

The Grenada Coast Guard had some tips for individuals taking the trip up to Carriacou.

Corporal #360 Joseph appealed to Grenadians to take the necessary precautions to ensure their safety on the water.

Corporal Joseph said the Captains of any vessel will be held accountable for any mishap due to neglect of the law.

Five people are still missing after 2016’s incident. According to reports a small fishing vessel departed from Levera Beach in St Patrick’s on February 7th 2016, with eleven people including luggage on board but ran into difficulties shortly after leaving shore.

Only six of the eleven persons remain accounted for; one deceased and five alive. The deceased was the lone female on the boat, a young teenager. 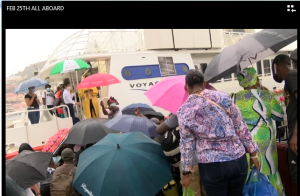