ACCIDENT MARK THE START OF 2021

Five fatal accidents claimed the lives of seven individuals in 2020.

The traffic department of the royal Grenada police force continues to grapple with people driving under the influence of alcohol, speeding and driving without due care and attention.

The first day of 2021 began on a horrific note for one biker.

Alvin Rush of central Gouyave Estate Gouyave St. John was flown out of Grenada, out of fear that he may lose two of his limbs.

His right leg was partially severed and his right arm broken when the three wheeler motorcycle he was riding collided with a grey Altizer in Bathway on New Year’s Day.

What started off as a New Year’s Day ride-out with fellow bikers, ended painfully for him. Passers-by rendered their assistance to the badly injured biker while they waited for the paramedics to arrive.

Rush was taken away by ambulance about three quarter of an hour later.

Speaking to Superintendent in charge of the traffic department Randy Connought, there were reports of thirty-one minor accidents and one major between the period December 31st 2020 and January 3rd 2021.

Some of the accidents, the officer confirmed were as a result of speeding. The use of the breathalyzer has contributed to officers determining the percentage of alcohol consumed by some individuals.

The traffic head sounds his reminder to motorists  to drive with due care and attention taking into consideration other road users and motorist. 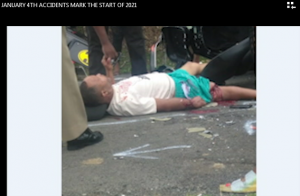