CARICOM leaders have taken a decision to present a united front to the European Union, in addressing the issue of blacklisting.

In 2017, the EU announced that a number of Caribbean islands were included on a list of global territories considered tax havens.

Grenada and St. Vincent have since been removed, after making the required legislative changes.

However others are still grey and blacklisted.

In briefing the media on Tuesday, Oliver Joseph says CARICOM leaders have taken a decision to individually engage EU officials on cooperation efforts, to have them removed from the list.

He says Caribbean Countries will use the relationships they have bilaterally with EU Countries to avoid blacklisting, as the decision to put a territory on the list must be unanimous.

He told reporters if any member state objects, the territory in question would not be blacklisted.

Another development was the formation of the CARICOM Private Sector Organization, a welcomed development by the local business community.

Joseph says the group will focus on the smooth implementation of the CSME.

“The participating member states took a decision to continue in their implementation of measures to ensure the smooth implementation of CSME. An important feature of this meeting was the private sector, labour society and civil society presentation to the heads. They have established a private sector body known as ‘CARICOM Private Sector Organization and they have applied to CARICOM to be designated as an associate institution of the community.”

Minister Joseph reported that this is expected to be finalized by the end of the year. 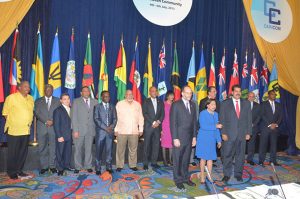