A TRIBUTE TO MR. ELVIN NIMROD

Members of the legal fraternity on Thursday assembled virtually to pay tribute to the life of former Legal Affairs Minister and a Lawyer by profession, Mr. Elvin.

The Supreme Court of Grenada held a Special Sitting Thursday morning to commemorate the life and service of former Legal Affairs minister and a lawyer by profession, Mr. Elvin Nimrod.

Nimrod died in the United States on February 6th, 2021 after battling a period of illness.

The AG said that Mr. Nimrod was instrumental in the introduction and implementation of several pieces of legislation such as the introduction of the historic Eastern Caribbean Civil procedure rule which came into being under his watch.

The Attorney General hailed him a man of his word.

Speaking on behalf of the Grenada Bar Association, Ruggles Ferguson, recalled the many times Mr. Nimrod verbally clashed on issues however he never held a grudge.

Tributes came from the Director of Public Prosecutions, Christopher Nelson, Dr. Francis Alexis, and several others.

Mr. Nimrod’s body arrived on the island of Carriacou on Wednesday. An official ceremony for the late Elvin G. Nimrod, Former Deputy Prime Minister will be held on Friday 12th at the Lauriston Mini Stadium in Carriacou. Interment will be at the Brunswick Cemetery, according to Anglican rites.

Mr. Nimrod, who served as the Parliamentary Representative for Carriacou and Petite Martinique for 19-years, will be given an official funeral.

As a mark of respect in honour of the late Elvin Nimrod, all national flags will be flown at half-mast on the day of the funeral. 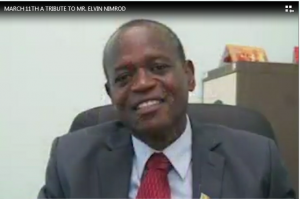